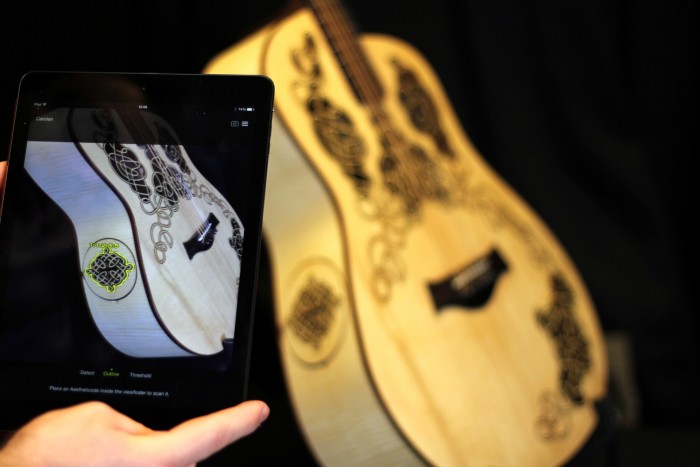 A somewhat nerdy post about guitar tunings today, very much aimed at the guitarists among you.

Guitars don’t always have to be played in ‘standard’ (EADGBE) tuning. Indeed, while standard is an extremely versatile tuning, there are alternatives that better suit particular styles of music, especially Celtic music. One feature of Celtic music is that it tends to be modal, meaning that the tunes and accompanying chords are often missing the third note in the scale which defines them as being either major or minor. Instead, Celtic tunes often sit ambiguously somewhere between the two. Related to this, Celtic tunes are often accompanied by drone notes rather than more fully fleshed out complex chords and harmonies, for example the drones found on various kinds of pipes.

One popular Celtic tuning is DADGAD, so called because the strings are tuned (from bass to treble) to D then A, D, G, A and finally a top D.  This retunes the guitar to a D suspended 4th chord which is is far more modal sounding (the third note which would have been either F sharp for a major chord or F natural for a minor chord is now raised to the G). If you want to hear it in action, this was the tuning we used to play Carolan’s Concerto back in Post 38.

Carolan has been experimenting with another Celtic-sounding tuning in the form of DAADAE. This one is distinctly weird. While the idea of dropping the bass E from standard tuning to a D and the B to an A are familiar, the middle two strings come in for more unusual treatment. Detuning the G all the way down to a D and the D all the way to an A are big drops that produce a deep sound as well as somewhat looser strings.  As an example of how this sounds, here is the traditional tune Banish Misfortune.

The resulting tuning has a couple of very interesting features. First, the top three strings are now tuned the same as for the top three strings of a fiddle, mandolin or tenor banjo. At the same time, the bottom three strings give good modal drones that work well in the keys of A and D, which are common keys for traditional tunes. All of which means that if you have learned the familiar patterns of playing Celtic tunes on these other instruments you can directly transfer them over while also easily introducing some drones.

And here’s two further tunes in A – John McCusker’s Shetland Molecule and the traditional Star of Munster. For a bit of extra inspiration we’ve played these over some funky ‘Greasy Groove’ drum loops from Terence Higgins.

Although there’s some radical detuning here, we’re still using normal 12-53 gauge strings. You could consider a custom set of strings if you were really serious about using this tuning, for example for a proper recording session.

To be honest, it’s a pretty simple trick that let’s you play conventional fingerings for tunes while adding some modal drone-style accompaniment without having to learn lots of new chord shapes. To our ears it certainly seems to suit Carolan’s Celtic leanings.