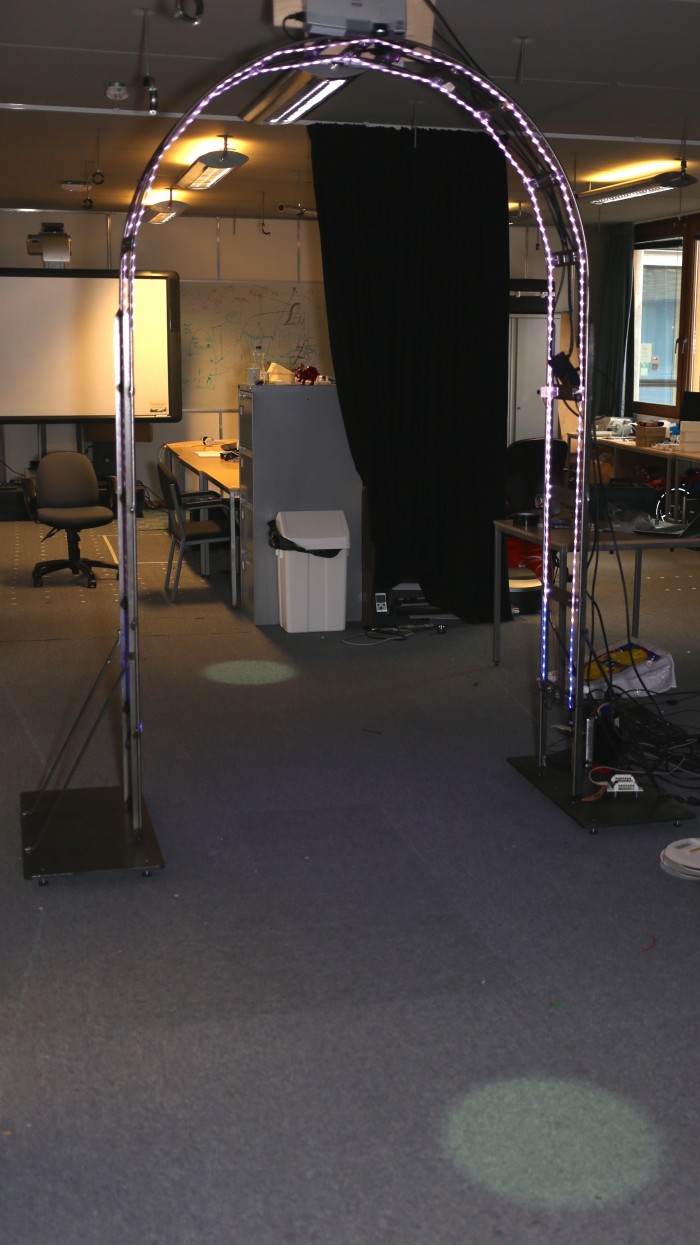 Development of the Data Journeys Archway

The Data Journeys Archway prototype was a temporary public art intervention at Nottingham’s Light Night, Friday 5th February 2016. So far we have covered the event itself and some of the context of this work. Below, we will briefly focus on the development process.

From our early discussions of a prototype for Nottingham’s Light Night, the following design idea emerged: a transportable archway ‘platform’ for example fabricated from steel. A single archway would be roughly 1.5m wide and 2.25m high to allow two people to pass simultaneously in the same or opposing directions. It would be made from steel pipe with a solid footing and enough fittings to attach ‘anything’ to it, with the arch itself being extremely simple but adaptable. Assembled on site, it would be sturdy enough to deal with members of the public interacting, while attended by MRL staff. As a platform, the archway would be flexible enough to allow the fitting of technological features such as sensors and actuators and of design features, modifying the look and feel as well as the user experience of the arch.

As a way to immediately begin exploring interactions with the archway, we bought a cheap, ready-made garden arch to set up in the lab (see picture on the left below). This was later replaced by one made to our specifications, which is much more sturdy (see picture on the right below).

Our initial discussions focused on what personal data we would collect, what the projectors would be used for, and what we would offer people in return for them interacting with the arch in some way. We considered asking people to “register” at the archway using their contactless travel pass or even payment card, in a similar way to the Automated Poetry Machine.  Talking through a scenario for how this might work, though, we felt it would take far too much human orchestration to explain to people what they had to do and why. Asking people to share some information from a contactless payment card with strangers on a Nottingham street might have been a challenging way of testing how much people were prepared to give away, and what they understood about the risks, but it seemed to make the archway itself secondary to long conversations about data security.

We realised that we were more interested in doing as little human orchestration of the archway as possible, and instead being able to stand back and observe what happened. This would produce much more valuable insights about making archways that could be installed in public space for periods of months rather than just one evening. We were drawn to the narrative possibilities of the archway, and whether we could use the choice to step through the arch, or not, as a framework that gave people chance to reflect on personal journeys. We moved on from simply looking at what would happen if we harvested some personal data in a public space to using some personal information to enrich the meaning of a personal experience that took place in the public realm.

This resulted in the experience described in more detail here. In a nutshell, when passing through the arch, people were prompted by a question projected on to the floor. This was followed by a projection of a piece of wisdom and of their ‘measurements’, including people’s height, information about their gender and clothing and their attitude, on the other side.

Apart from the technical challenges, most of our time in the development process was spent on working through the rhythms by which the projections and the patterns of LED lights on the arch could orchestrate the framework for reflection without us needing to intervene. We were deliberately trying to create an experience, which gave people reason and chance to pause for thought and which would be ‘consumed’ in a relatively slow, reflective way.

We also explored how to link this in with social media. We made a Facebook event for the archway on Light Night, and described it as follows: “If you stand in front of the archway there will be a question for you to ask yourself. Step through the arch and it will learn something about you, and give you a piece of wisdom in return.” All measurement recorded by the arch were being posted to that page.