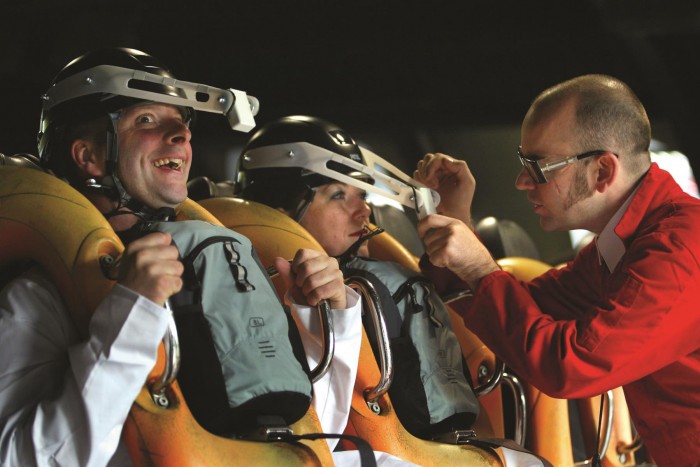 Horizon Digital Economy Research has collaborated with the artist and engineer Brendan Walker, founder of the creative company Aerial, to explore how biosensing technologies can enhance thrilling experiences across the entertainment sector. Through Brendan’s multifaceted Thrill Laboratory performances, they explored the use of wearable and networked biosensors that capture heart rate, galvanic skin response (used as a measure of emotional response), and facial muscle movements, alongside acceleration data and video, to enable new forms of entertainment.

Brendan says: “This research has had far-reaching impact. As an example, the results have led television companies to experiment with incorporating biodata into TV programmes. Their motivations have been to provide close-up and unusual views of intense experiences such as riding rollercoasters, but also to help support a common narrative of the ‘scientific’ investigation of such experiences.”

The lead item on the BBC’s Blue Peter in May 2013 shows two presenters comparing their reactions to Alton Towers’ new ride, ‘Smiler’. Features were also aired on the BBC One Show, the BBC popular science programme Bang Goes The Theory, ITV Daybreak, Discovery Networks International and Discovery Canada. Radio coverage has included BBC World Service and You and Yours.

“Not only did these various productions build on our published research and reach many millions of people worldwide,” Brendan says,  “but also they employed our researchers as creative, technology and data analysis consultants, and directly used the technologies that we have developed to capture, analyse and visualise biodata.”

The same research has been also been exploited by marketing companies to create innovative campaigns for thrilling products. Merlin Entertainment, the world’s second largest provider of visitor attractions, used the technology and know-how to market two new attractions, a ‘horror maze’ themed around the film Saw VII at Thorpe Park, and a new interactive ride at The London Dungeon.

Brendan continues: “Summit Entertainment (part of the global film production and distribution company Lionsgate) engaged us to help produce a promotional trailer for their horror movie Sinister in which audience members’ ‘fear factors’ were measured as they watched a pre-screening of the film.

These led us to being engaged as consultants by the global advertising agency TBWA to support their  “Built to Thrill” brand activation campaign for the NISSAN Juke car which involved us conducting a series of thrill experiments to measure peoples’ physiological responses to various driving-related thrilling experiences.”

The results were incorporated into four short films that appeared on the campaign website that reached 164,000 consumers.

Working with rides and other thrill experiences has also captured the public’s imagination and proved attractive to science communicators. The team was commissioned by science communicators to engage thousands of people with a hands-on experience of the research at festivals and exhibitions. These included the Research Council’s Pioneers exhibition in 2008, where they exhibited a bucking bronco ride; the 2011 Cheltenham Science Festival for which they created PerPing, a breath-controlled ‘tennis’ game; and the Mayhem Horror Film Festival in 2009, 2010, and 2011 where they conducted a series of ‘fear experiments’ on audience members who watched classic horror films. The Pioneers exhibit was subsequently nominated for the International Digital Arts award at Future Everything, the UK’s leading annual festival of digital arts.

The various activities described above have generated extensive press coverage, impacting on further millions. This includes coverage in the New York Times (February 2008), Daily Mirror (October 2008), Observer Magazine (May 2009), the BBC’s Focus science magazine (August 2009), Guardian Science Weekly (November 2010), the Independent (August 2011), New Scientist (May 2011), and the London Evening Standard (June 2012). The research even featured as the cover article of The Times’ Eureka science supplement in January 2010 and as the cover article of the September 2013 edition of Communications of the ACM, which reaches 100,000 computing industry professionals worldwide.

“The use of biodata in entertainment to reveal the hidden emotions and physical performance of contestants, or provide biofeedback to augment their experience, is creating exciting and innovative opportunities for British producers. The requirements for capturing, analysing, and broadcasting hifidelty data, both recorded and real-time, is presenting unique technical challenges that are also relevant to other industries, which include the medical sector and engineering.”