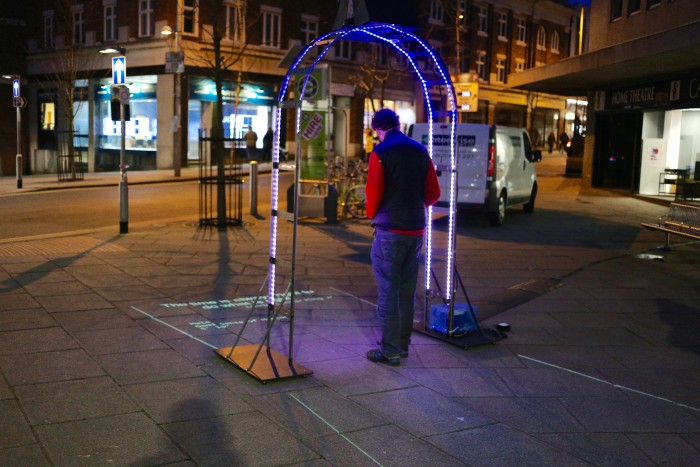 The Light Night archway was a first experiment as part of the development of a larger archways project, an outcome of and follow-on from Andrew Wilson’s shared research residency with Mixed Reality Lab and Sustrans, the national active travel charity, and funded by Horizon. The original inspiration for the archways project came from a member of Sustrans’ staff, who said they thought part of the activity of the organisation was to get people to “notice their journeys”. “Noticing journeys” seemed a productive phrase, which could apply not just to travel journeys but personal journeys, personal histories and perhaps even personal health and wellbeing.

Because of the work MRL do, which is about technology in the everyday environment, and that of Sustrans, which is about travel choices and making places that people want to spend time in, rather than passing through by car, it was important that any intervention about noticing journeys happened in public space. The Light Night archway is the first step in developing a city-wide or even cross-city participatory public art project which combines more than one showpiece city centre arch, installed for a period of months at least, along with a larger number of neighbourhood arches hand-decorated by people at community focal points.

Light Night events take place in towns and cities across Britain and Europe. Typically in Britain on Light Night, arts and cultural venues (including food and drink venues) open late on one evening and organise one-off events with some reference to light and illumination.

The range of events can attract tens of thousands of people into the city centre, and Light Night significantly changes the demographic of people in the city centre after dark, bringing far more children, families, and older people into what would usually be a period dominated by younger “night life” visitors to pubs, bars and clubs. To develop for this particular context we focussed on interactions with light and the threshold between the two sides as a means to make people take notice of their journey.

This was augmented with a focus on personal data and the role of the built environment in capturing this data, motivated by collaborating with MRL’s architect and researcher Holger Schnädelbach, whose research is currently framed by a Nottingham Research Fellowship. This fellowship investigates the Built Environment as Interface to Personal Data, focussing on the interactional feedback loops that can be created and making the path from personal data to big data legible.

When people approached the arch from either side, we projected a question onto the ground in front of the arch, for example “Who has opened a door for you and where did it lead?”. People had a chance to think about that question even if they chose not to walk through the arch. If they then decided to walk through the arch, we used a sensor to record their height, which was displayed on the strips of LEDs on the side of the arch as they passed through. An observer discreetly using a web page on a mobile phone recorded some basic facts about the person, for example male or female, wearing a hat or glasses (when applicable), along with a choice from a range of positive statements about a personal quality, for example “Always smiling” or “Steps forward boldly.”

As the person passed through the arch, their height, their personal qualities, and a piece of “wisdom” in the form of a positive quote, such as “I have not failed. I’ve just found 10,000 ways that won’t work. [Thomas Edison]”chosen at random from a list, were projected in front of them on the far side of the arch. This information was also posted to the Facebook page for the archway at the same time.

Based on log files we estimate that around 500 people passed through the arch in that time. We observed several different patterns of behaviour that formed around the archway, much of which was unexpected and partly emerged from the volume of people in the city centre for Light Night. Despite that, over the course of the three and a half hours we didn’t have to step forward and orchestrate anyone’s experience of the archway at all; we were able to stand back and observe for the whole evening. We are now in the process of fully evaluating the archway.