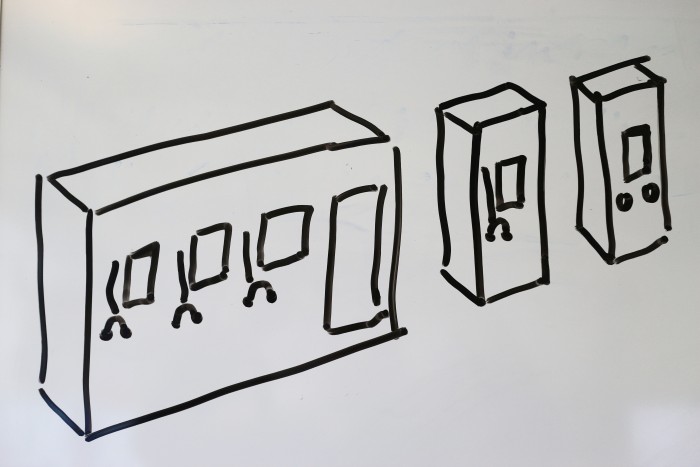 The Digitopia experience premiered on 12 February 2016 at Lakeside Arts Centre, Nottingham, alongside Digitopia the stage show.

The Digitopia experience was developed in close collaboration with Nottingham-based Tom Dale dance company.  Tom Dale approached the Mixed Reality Lab (MRL) to design, develop, deploy and evaluate an experience using digital media to engage audiences in the foyer of respective theatres, while these audiences are waiting for the show to start and when they are leaving. Tom Dale are already employing digital technologies in house, especially drawing on projection mapping technologies and now beginning to include interactive technologies on stage, such as the Microsoft Kinect sensor.

Moko Dance’s commission to the Tom Dale Company included not only the show, but also plans for engagements of audiences pre- and post-show. Tom Dale sought the input of the MRL and Horizon to design for this context for their experience in interaction design for the general public and in public settings.

The initial discussion lead to the following starting points: 1) the design of a resource that allows children and parents to engage with Hex, the line character appearing in the show, 2) that resource would allow people to make geometric shapes similar to what is shown on stage, 3) the line combinations into shapes would trigger the dynamic composition of an accompanying soundtrack inspired by the stage show, 4) the resource would be available in the classroom, at home and in the foyer, accompanying the before and after of each show.

Moko dance, the funder and supporter of Tom Dale provided us with a set of other constraints to consider. MOKO Dance is a consortium of 6 major UK dance houses who have received strategic touring funds from the Arts Council to increase the distribution of dance for children across the UK. They have commissioned the creation of work and are responsible for touring it: A) the experience should be modular so that it can be delivered in very different theater foyer spaces, B) it should be aimed at audience ranging from 5-10 years of age, C) audiences number would be around 150-200 at each show, D) the experience had to be designed to be toured to different venues and E) had to be robust to withstand the stated audience numbers.

A first sketch developed in week three of the project already exhibited the key elements of the final experience, all in turn inspired by the emerging details of the stage show developing in parallel.

This included the idea that the experience would be deployed on tablets, possibly embedded into freestanding plinths that have either an integrated speaker or a set of headphones.

Each player would be able to select lines from a limited pool and connect them up to create specific sets of shapes, with lines for example snapping to each other at 60 degree angles. At this time we thought about how the created shapes might link to a number of variables, which would in turn link into a generative musical score inspired by the stage show. Multiple tables could then be used together to create a single, overarching soundtrack.

The Digitopia experience is currently touring to 16 UK venues in total.