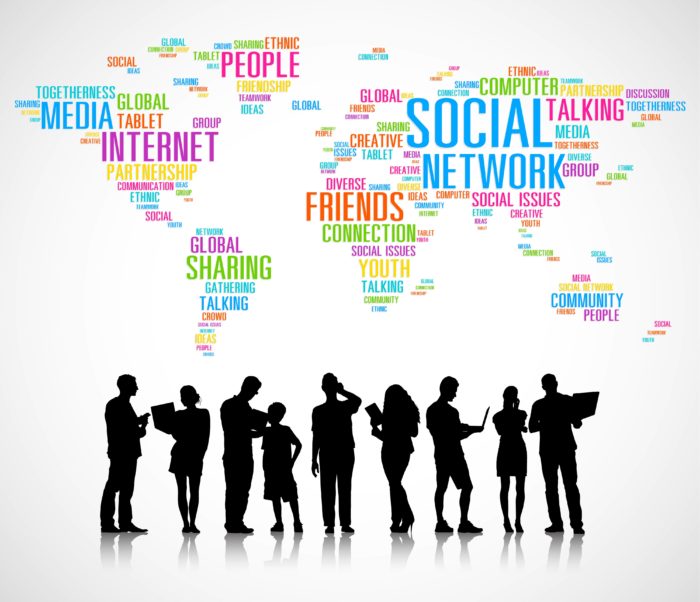 Most technology platforms are made on the assumption that one account is used by one person, however in reality this is not the case. Online accounts, particularly media-related platforms, one’s such as Spotify and Netflix, are often shared between people. There are of course, cases where people have multiple accounts on one platform, sometimes set up to be used with different groups of people, for instance their children, colleagues or friends.  To further complicate the situation, people have accounts with several different platforms to be able to access a multitude of services. 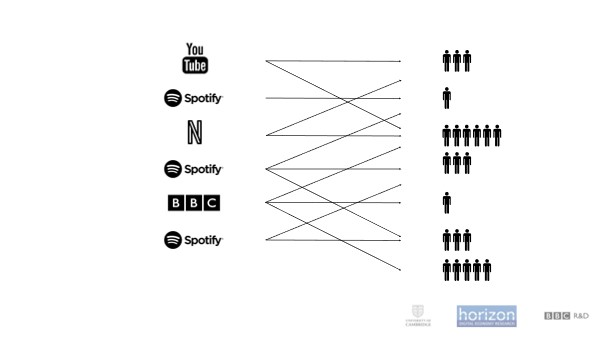 So the question we asked in MIDAS, was how do we manage this, and as technologists, how do we support users to navigate the scenario of ‘sharing’ in a safe, secure and efficient manner?

MIDAS activity commenced with a formative stage during which we gathered the perspectives of the users and developers of accounts.  The user focus groups mentioned in our mid-term blog involved 25 participants and uncovered three sets of challenges:

UX challenges: many of the participants didn’t know how to share accounts, nor did they know how to navigate platform interfaces or deal with shared resources – for instance linked bank cards.

Social challenges: with no hierarchy, no norms, or ways to go about doing things, the question is how can users handle social situations involving sharing of accounts with minimal friction?

Privacy and security challenges: discussions around how to deal with things such as pop-up notifications that they didn’t want to share and how to protect passwords – that are of course shared to access accounts – were a big concern.

We presented the results from our focus groups at the 2022 Human Computer Interaction (HCI) international conference (ACM CHI 2022). The next phase of MIDAS involved interviews with developers, designers and technologists from BBC R&D, with whom we had previously worked with on New Forms of Public Value at the Edge. We also interviewed members of staff from other BBC departments, such as Accounts and Profiles, along with academics specialising in legal technologies, sociology and security.   This work highlighted further challenges. A major concern for the makers of platforms was around legal issues, and in particular the fact that users share platforms that aren’t built with sharing in mind – and hence give no protection to the user if things go wrong. Data was also an issue – transparency, legibility, negotiations, how to process and help with portability.

Following interviews, we developed two design scenarios to test with our participants. The first concept involved a shared recommendations ‘space’ or ‘spaces’ set up with different groups of people. This system avoided having to share the whole account and thus served to address the challenge of exponential ‘pollution’ within one space. Our second design involved ‘shared’ sessions, so again instead of sharing a whole account, people could come together on a given date at a given time, enabled by a pre-set code, to share an experience such as, watching a film together.  The second design was a suggestion put forward by younger participants, who were keen not to have to share more data than they already do. Additional layers were added to the second system, such as remote access, to enable the code to be more widely disseminated, to different countries for example. The option to keep the code open post-session was also discussed, enabling people who couldn’t join ‘real’ time, to still access and enjoy the content at a later opportunity.

We found that many participants liked the flexibility our designed systems offered, however they wanted to do more with their personal recommendations. They wanted to be able to include more content about them, delete and/or hide certain areas, feedback to the system and freeze them – so as to avoid any changes being made by others becoming permanent.  Participants also suggested an option to ‘push’ recommendations to others – a useful idea as previous work had shown that people value recommendations received from people they know. Finally, participants told us they liked the more seamless process of sharing offered by our designed systems, rather than the current clunky procedure involving logging out of platforms (and copying text) to send recommendations via different messaging systems.  Other areas were discussed such as sharing recommendations with larger communities and copyright issues.

We are now working on a set of best use/guidelines primarily aimed for practitioners and researchers and disseminating our findings widely – particularly as platforms such as Netflix start considering changes to their service – which may affect the currently popular sharing practices significantly. 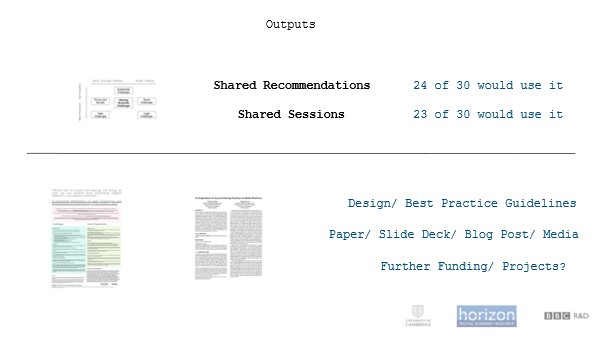