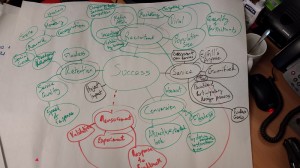 Crowdsourcing is increasing in popularity as a form of distributed problem solving enabled by digital technologies. “The crowd” is invited to contribute towards projects, this contribution potentially being in the form of knowledge or design skills. On June the 3rd this year an interdisciplinary workshop investigating crowdsourcing and citizen science convened. It brought together experts and practitioners from many disciplines that apply a crowdsourcing approach, presenting outputs and how crowdsourcing aids projects from GalaxyZoo (an interactive project for volunteer classification of galaxies), Artmaps (an application for crowdsourcing information on Tate digital artworks) and Taarifa (a platform and community supporting the crowdsourcing of public service issues in the developing and developed world).

My personal presentation was on Taarifa, a project I started in 2011 to support community based public service delivery. Since then I’ve worked in collaboration with the World Bank in Uganda to support the Education and Local Government Ministries with reporting across the country; what started as a pilot was rolled out quickly to cover 111 districts, over a year of an at-scale pilot 14,000 reports were received and acted upon. This resulted into wider research into the wider use of public participatory service delivery in developing countries (FOSS4G Taarifa paper). The uniqueness of Taarifa is that it has been developed and maintained by wholly volunteer contributors, creating free and open source software. The contributors to Taarifa are as diverse as the problems which Taarifa addresses, ranging from PhD Candidates like myself to Physicists, Bankers and Community Organisers. Consequently, Taarifa doesn’t just look after a platform of software; it acts as a forum to share knowledge, experimentations and innovation.

Taarifa was conceived at the London Water Hackathon, as an innovation around water access and quality in Tanzania. Access to water in Tanzania currently covers less than 50% of the country’s population and with 38% of the water infrastructure, like taps, are graded as non-functional. Currently the Ministry of Water has a WPMS (Water Point Mapping System) developed after a countrywide survey. However, the system has is no functionality to update the status of the water point or view a history of service problems. This is combined with poor performance of repairs nationally if water points are repaired; citizens are disenfranchised with current methods of reporting water faults, if they can report at all. The ecosystem around supporting the repair of water points is non-existent; consequently millions of Tanzanians have no access to publicly delivered water.

It is important to stress that there isn’t ‘one’ solution to the problem of water access nor is there ‘one’ platform or software to ‘fix’ the problem. There is no one discipline that can resolve the issue of water access, there has to be a multidisciplinary approach, to a multidisciplinary problem. Cartography, Economics, Engineering, not one discipline can wholly resolve the issue of water access, nor it is an issue which can be researched and resolved through the lens of one discipline. The societal side of technology needs to not be just taken into account, but integrated into the core of the design with the people who face the issue and who will use the technology to resolve it. It is imperialistic and deterministic to assume that technology can just ‘fix’ the kind of complex issue of water access, especially as the technology is, in effect, imposed broadly by outsiders to the community in which it is intended to take root. Hence, an understanding of the community is needed; who the users are, how water access is dealt with currently and the general state of affairs. From this we have created two streams of Taarifa, one that is currently implemented and one that is currently being designed, incorporating lessons learned from initial deployments.

The first iteration of Taarifa’s design story and user action assumed that mobile connectivity wasn’t an issues and that there was an active organisation, be it government or an NGO wanting to resolve water access issues, another predicate was that the water infrastructure was adequately mapped. This led to the following reporting process for a water issue; When a report is made, for example from a Community Water Officer or a concerned citizen, it goes into the Taarifa workflow, which identifies the specific water point from the database. The reporter is then notified, thanked that they have made a report and given an estimation, based on prior time taken to repair broken water points in that district on how long it will take. An engineer is informed what is wrong with the water source. Once an engineer has been selected, a verifier can verify that repair has been completed satisfactorily. Importantly, at each stage the initial reporter is informed about the progress of the repair. This was the version trialled in Uganda.

Subsequently, learning from how Taarifa was deployed and used, the design is now intended to incorporate offline capability and ‘marketplace’ functionality. The offline capability due experiences in Uganda that connectivity wasn’t universal (this was not a surprise, however, improvements to the paradigm should be incremental) the marketplace due to the capacity of local government and organisations. If a district has no capacity to repair a broken water point, the cost could be estimated by a number of engineers receiving information about the problem and they bid using their phones. A micropayment is taken to support the system, providing a surplus, potentially reinvested into creating new capacity. Micropayments are ubiquitous in the developing world, effectively replacing a formal banking infrastructure, hence are familiar to the communities who will use this method. Consequently this should hopefully be viewed as an extension of what already exists, not something completely new.

What does all this mean within the context of the Crowdsourcing in Action workshop? Broadly it allows us, as academic researchers to typify crowdsourcing and understand more. Taarifa acts as a community crowdsourcing code and by extension curating community reporting issues in developing countries. Artmaps develops applications for use on smart phones that will allow people to relate artworks to the places, sites and environments they encounter in daily life. GalaxyZoo leverages the many eyes of the crowd to process space imagery data. Thematically, all the projects presented utilised volunteers to provide information, process it and return it to the user and other interested actors.

After the initial presentations we formed groups, of other experts and practitioners to build a common model of what crowdsourcing means to their projects and work. Then coalescing at periods to feedback practice and information learned from other participants. In doing so, we learn from successes and failures of others, understanding common themes for collaboration.

In identifying these common themes, it hopefully sets an agenda to focus on specific factors and communities under the crowdsourcing agenda. Jeremy Morley and I are planning a future “How to Hackathon” event building “Crowdsourcing in Action”. Hackathons allow volunteers (generally) to co-create ‘hacks’ to problems. In its truest sense you accelerate innovation by combining a random mix of people and skills, providing a set of previously unsolved problems, then observing what happens. As was identified in the Crowdsouring In Action, we can observe the states before crowdsourcing; we can help provide a process for participants; we can observe and process the result. However, an understanding of how participants use the tools to conduct crowdsourcing is scant. By now focusing on hackathons, we hope to discover more on how the design and development of crowdsourcing works